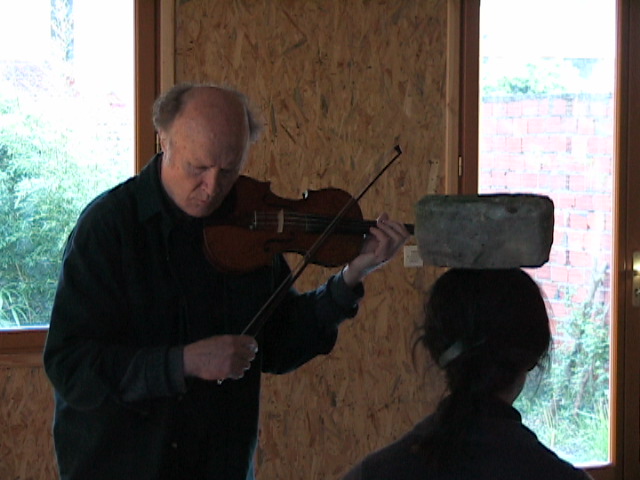 Malcolm Goldstein will be performing at UCSD’s Wednesday’s  on April 13 at 7 at UCSD’s Conrad Prebys Music Center at 7pm. For more information http://musicweb.ucsd.edu/concerts/

Malcolm Goldstein (born March 27, 1936 in Brooklyn, New York) is an American–Canadian composer, violinist and improviser who has been active in the presentation of new music and dance since the early 1960s. He received an M.A. in music composition from Columbia University in 1960, having studied with Otto Luening. In the 1960s in New York City, he was a co-founder with James Tenney and Philip Corner of the Tone Roads Ensemble and was a participant in the Judson Dance Theater, the New York Festival of the Avant-Garde and the Experimental Intermedia Foundation. Since then, he has toured extensively throughout North America and Europe, with solo concerts as well as with new music and dance ensembles.

His “Soundings” improvisations have received international acclaim for having “reinvented violin playing”, extending the range of tonal/sound-texture possibilities of the instrument and revealing new dimensions of expressivity.

He has been awarded grants from the National Endowment for the Arts/Inter-Arts (USA), the Massachusetts Council on the Arts, the Canada Council for the Arts, and Conseil des arts et lettres du Québec, as well as numerous commissions from Studio Akustische Kunst/WDR Cologne. In 1994 he received the Prix International award for his acoustic art/radio work “between (two) spaces”.

He has written extensively on improvisation as in his book Sounding the Full Circle. His critical edition of Charles Ives’s “Second String Quartet”, which was commissioned by the Charles Ives Society, is now being prepared for publication.